Samsung’s much revered smartphone, the Samsung Galaxy S III GT-I9300, has been the trending topic on all blog sites and reviews this past few days, following its release two days ago in London during the Samsung Mobile Unpacking 2012 event. Finally, the rumors and speculation about Samsung latest flagship smartphone has ended after top executives of Samsung unveiled all the technical specification and features of the phone as well as its innovative accessories that will soon be available this year.

Samsung Galaxy S III is the company’s latest addition to its high-end smartphone products and it is expected to dominate this market with its impressive design, build, and performance. The device has revolutionized the user interface and interaction with its ability of the Galaxy S III to see, listen, and respond to the needs of its user. 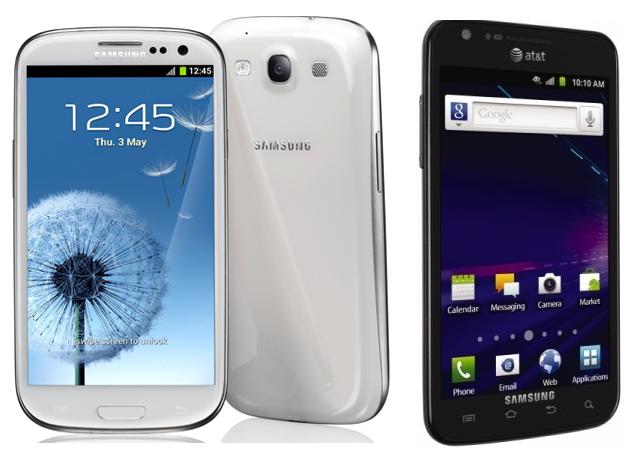 Samsung Galaxy S III GT-I9300 has a well-though-of design concept taking much of its form and feel from nature. Samsung top executive have discussed that the design of the Galaxy S III was inspired from pebbles, leaves, and the drop of water. It can be noticed that the S III has highly curved edges that resembles the smooth curves of a pebble. It is also slim and light weight like a leaf and the latest UI that runs in the smartphone is inspired by drops of water that mimics the warmth and beauty of nature. JK Shin, Samsung President and Head of IT and Electronics Division, quotes the Galaxy S III as “effortlessly smart and intuitively simple”.

The minimalistic design of the Galaxy S III is noticeable with its slim bezel around the large screen display and the physical buttons and ports on its edges. On the top of the phone, a 3.5 mm headphone jack can be seen. The left side of the phone consists of the power button and the other side is where the volume rocker is located. At the bottom of the phone, a micro USB can be seen that serves as the port for charging the phone, hooking it up to a PC, and for mini HDMI port. A physical Home key button can also be seen at the bottom of the screen and two touch sensitive buttons along its sides for the Menu key and the Back key. The touch responsive buttons illuminates when the phone is active.

Both devices have the same 8 megapixel camera sensor with a resolution of 3264 x 2448 pixels. The camera is also equipped with an autofocus feature and a bright LED flash. Some of the features include geo-tagging, touch focus, face and smile detection, and image stabilization. Both cameras are also capable of recording HD videos at 1080p resolution. Samsung Galaxy S II Skyrocket has a higher sensor for its front-facing camera with a 2.0 megapixel secondary camera compared to the 1.9 megapixel camera of the Galaxy S III. However, the secondary camera of the S III is capable of recording HD videos at 720p resolution.

What makes the Samsung Galaxy S III better than the Galaxy S II Skyrocket are the added smart features to its camera, it has burst mode shot option that takes a total of 8 or 20 photos and its Best Shot and Best Photo feature will automatically choose the best photo for the user. The Galaxy S III also has a smart feature that can recognize individuals in the photo through face recognition and will offer the user to tag the individuals and to share the photo them. The innovative camera features of the Samsung Galaxy S III make it the winner of this round.

Samsung Galaxy S III runs the latest Android 4.0 Ice Cream Sandwich out of the box and it has an overlay of Samsung’s latest TouchWiz nature UX that was specifically modified for the S3. The TouchWiz nature UX features a new unlock animation that mimics the water ripples and the sound of a water drop when the user touches the screen to unlock the phone. On the other hand, the Galaxy S II Skyrocket comes with an earlier version, the Android 2.3.5 Gingerbread and TouchWiz 4.0 UI on top of it. However, reports say that an ICS upgrade for the Galaxy S II Skyrocket has already leaked and existing users can use the ROM to update their OS, official OTA updates will soon be available also. Samsung Galaxy S III wins this round by having the latest Android ICS and its premium TouchWiz nature UX.

The Galaxy S III supports LTE network on a regional basis. Samsung has also announced a US version of the S III that will support HSDPA+ and will be LTE enabled. The basic version will support HSDPA and HSUPA with data speeds of up to 21 mbps and 5.76 mbps respectively. Samsung Galaxy S II Skyrocket is also LTE enabled and support similar data networks as the S III. Both phones are also equipped with Near Field Communication (NFC) support and will have Wi-Fi direct and Wi-Fi hotspot capabilities. The main difference is that the Galaxy S III is equipped with the latest Bluetooth 4.0 while S II Skyrocket has the 3.0 version. Both devices also have a microUSB port but the Galaxy S III is the only one with MHL and USB on-the-go feature. The winner of this round is the Samsung Galaxy S III.

The Samsung Galaxy S II Skyrocket costs less with a price of $249.99 after a two-year contract with AT&T while the Galaxy S III is expected to cost around £500 or $807.3. Obviously, the premium features of the Galaxy S III will come at price, though it might not be an issue for its high-end market.

The Samsung Galaxy S III GT-I9300 surpasses the Galaxy S II Skyrocket in terms of its design, display, camera, memory, connectivity, storage, and its load of features. However, official announcements regarding the processor of the LTE enabled S3 still has to be heard.

Samsung Galaxy S II Skyrocket has its own impressive specifications and features at its belt but the improved user interface and interaction that the Galaxy S III offers is something that makes consumers ecstatic of taking home the smartphone.

1 Comment so far. Feel free to join this conversation.